It was almost exactly one year ago that I took in my sister’s cat, Elaine. My sister was diagnosed with an aggressive form of breast cancer and the whole family was devastated. Her treatments were very aggressive to battle her disease, that at times, we weren’t sure she would survive them. It was a scary and stressful time on the whole family. In the end, we are so grateful that a year later, she is cancer-free.

Why do I bring this up? During her battle with breast cancer, our family came together “all hands on deck” to help my sister and her family through this really awful time. She is a wife, a mother of two human kids, 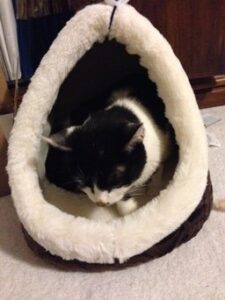 and a mother to two dogs and a senior cat – Elaine.

“Auntie Lauren? Elaine doesn’t look good. She’s peeing on the floor and she won’t eat. Daddy put her in the bathroom so she doesn’t pee anywhere else. Daddy doesn’t have time to take her to the vet. I’m worried!”

During this difficult time, my sister was so sick that she was living with our parents. The kids were at my parent’s house too, but went back home on the weekends to see their father, because their dad traveled for work. He had his hands full. Very full. “Avery, I’ll be over in the morning. Give me the garage code and I’ll let myself in. I’ll take Elaine to the vet.”

I PICKED UP ELAINE

The next morning, I drove over to my sister’s empty house and picked up the cat. She looked horrible. Was it sadness? pain? fear? Whatever look she was giving me, it wasn’t “happy,” that’s for sure.

I brought Elaine to her vet’s office. She weighed only five pounds. They had to hospitalize her due to her dire condition. They told me that we would see how the next three days went and that she “probably doesn’t have much time.” They ran every test imaginable. 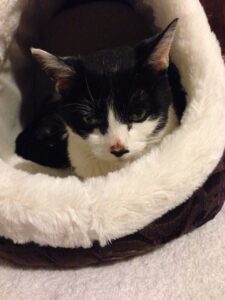 Elaine after hospitalization, her nose stained from food, because she didn’t have the strength to groom 🙁

Each day and night, I would drive Elaine to the vet’s office, which was an hour away from my house. I would drop her off before work and pick her up after work because her vet didn’t have anyone at the office overnight to monitor and I didn’t want her alone. During the daytime, however, she was being very closely monitored and hydrated. She spent three days in the hospital and looked like a different (healthier) cat when she was ready to go home with me.

The diagnosis was kidney failure and a bad kidney infection. The prognosis was poor. Her kidney values were “off the charts.” Literally.  The values were so high that they couldn’t be read. The vet said that she probably had days or weeks to live and asked me what I wanted to do. I decided to take Elaine home with me and give her tons of love and the best life possible, whatever little life she had left. I had hope though. She responded well to being hospitalized and she had an appetite.

Taking her home meant giving her very strong antibiotics to combat her kidney infection and daily subcutaneous fluids to keep her hydrated and help her kidneys. She was so weak, she could hardly walk and definitely too weak to clean herself.

I set her up in a spare bedroom, with prescription wet and dry food, fresh water and her own litter boxes sitting atop pee pads in case she had an accident. I bought her a “senior cat tree” – really, just a very small cat tree that she was still too weak to get into on her own.

After about six weeks and several different types of antibiotics, we finally cleared her kidney infection. She had gained weight and was approaching six pounds. The vet seemed very enthusiastic about this. We had more hope.

From August 2014 though about November 2014, I gave Elaine daily subcuteaneous fluids and her 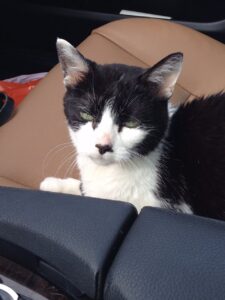 Elaine in the car laying in a sun puddle. White/pink nose!

prescription foods. She also received daily injections of Pepcid to help her with nausea. She was still very much alive and gaining weight… and she gained strength back. She could now clean herself again and she could walk and climb on short things. She was a happy girl.

By November, she stopped being tolerant of the daily subcutaneous fluids (very fiesty, which is a good sign of her strength) and I backed off from daily treatments to a few times a week. Overall, I felt like my mission with Elaine was to make her as happy and comfortable as possible. By the new year, we decided to only administer the subcutaneous fluids if she seemed low on energy, or had a particularly bad day of vomiting. Otherwise, we leave her alone, since she really hates the treatments.

KIDNEY DISEASE IS TREATABLE, BUT NOT CURABLE

Kidney disease isn’t curable. It’s degenerative, but not painful. When the kidney’s fail, they aren’t able to process the toxins in the cat’s system and ends up poisoning the cat. The kidneys are essential for removing waste from the blood, managing blood pressure, making hormones and creating new red blood cells. For this reason, Elaine can be nauseous at times, but overall she has a healthy appetite which is a very good sign. 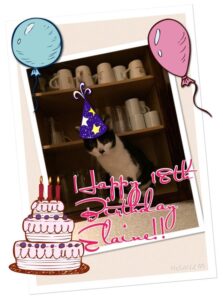 Elaine’s 18th Birthday! She’s energized and I found her snooping in the cabinet.

REFLECTING ON THE LAST 12 MONTHS – SOME TIPS

Since her initial diagnosis a year ago, Elaine has gained three pounds and is back up to eight pounds, another accomplishment that has stunned her vets. Here’s how I have kept her happy and healthy:

We take her to the vet once every month for an injection of Aranesp to help boost her red cell count. The medication is pretty costly (hundreds of dollars for about 6 treatments), so I joined the Walgreens Prescription Savings Club which covers pets and I pay about $200 for the 6 dose bottle.

Occasionally the vet will give her a Vitamin B injection, or Iron injection, but not every time. They check her red cell count each time to see if she is maintaining and they boost it. We run the full blood work every few months so we can see how she is doing.

We are so grateful for this past year. We didn’t know if she would make it, but she has beaten all odds. My husband and I know that we have given her our best and made this last year of her life a very special one. We love her dearly and hope that she will be with us in another year.

(UPDATE: Sadly, Elaine took a major turn for the worse in October 2015 and passed away from her renal failure on 10/10/2015. She enjoyed an extra 14 months of a great life that was super-happy and very high-quality!)

If you know of a family member or friend that is facing a serious illness, be sure to check in on that person and their pets. A serious illness can take so much out of a family (I never realized until it happened to my family). Oftentimes, the pets can be overlooked – even when they have been loved and cared for very responsibly prior to the illness. Subtle cues, like eating less, peeing more or lethargy can be signs that your pet isn’t feeling well and needs veterinary attention and care. In the flurry and upsetment of a serious illness, these signs can be missed. If you are sick, don’t be afraid to reach out to people for help. You deserve it and so does your pet.

A few products that have kept her a happy camper: