Is Your Cat A Monster at Mealtime?

If your kitty turns into a furry little demon at mealtime, it might be more than simple hunger or his bossy nature.

Researchers at the Università degli Studi di Padova in Italy recently published a case study in the Journal of Veterinary Behavior that concludes certain cats with ravenous appetites may have something called “psychogenic abnormal feeding behavior.” Psychogenic means the disorder has a root cause that is emotional or psychological rather than physical.

The Problem With Otto

The researchers in Italy, a team of eight veterinarians, studied the case of Otto, an 8-month-old Siamese cat. Otto’s owners reported the cat had an obsession with food.

Otto would wolf down his own meal and then snatch food from the bowl of the other kitty in the household. And he not only begged at the dining table, he also boldly jumped up on it and thieved food off the plates of human family members.

Otto seemed a bottomless pit when it came to the amount of food he could consume. He hissed and growled at mealtime, grabbing at the cat food can with his paws as his owners tried to dish out his portion.

When not gobbling his own food or someone else’s, Otto engaged in excessive attention-seeking behavior as well as pica, which is the eating of non-food items. Otto favored plastic toys.

Otto Gets a Medical Workup

Since possible triggers for his odd behavior included neurogenic and endocrine problems, Otto was given a complete medical workup. His laboratory findings were normal aside from hyperglycemia (high blood sugar). 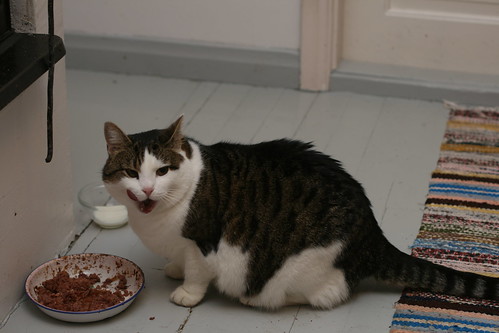 The cat’s behavior was also evaluated by the researchers. According to dvm360:

… the cat exhibited abnormal responses to food as it was being prepared and while consuming it, rushing for the food container, clinging to it, ravenously eating the entire ration and searching for more when he was done.

Based on the combined results, the researchers preliminarily concluded Otto’s strange food-related behavior was psychogenic in nature — the first confirmed case of its kind.

The vet team’s goals were to limit Otto’s exposure to potential stressors and modify his behavioral response to food. They prescribed a course of behavior therapy for the cat’s owners that included:

• Scheduling playtime and interaction with him.

• Avoiding exposure to food except at mealtime, which also meant no eating human food in front of him.

The owners were also instructed to switch Otto to dry cat food, but I disagree with this advice. Why compromise this cat’s health with a dry food diet? I think the other recommendations are fine, but I would absolutely not advise switching to dry food as a way to curb a food obsession or any other undesirable behavior.

I have personally seen dogs and cats at my practice exhibit odd behaviors when they were not being provided the nutrients their bodies needed. When pets are eating, but not being nourished with species-appropriate foods, they are filling up on unnecessary fillers and ingredients that don’t provide the cellular nutrition needed for healthy brain chemistry, healthy cell to cell communication, and healthy intracellular function. My belief is that can also lead to “behavior problems” that are really more suitably called nutritional imbalances.

If Otto was my patient, in addition to a real meat based diet, I would also consider natural flower remedies for feline stress.

Otto’s owners diligently followed the behavior modification instructions, and in about five months, the cat was over his food obsession.

According to the veterinary researchers, Otto no longer showed any abnormal behavior when he saw food. He was gradually allowed back in the dining room during family mealtimes, and he remained cool, calm and collected — even when his humans ate his favorite foods, like fish, right in front of him.

Based on this outcome, the researchers deemed the treatment plan highly successful and made a presumptive diagnosis of psychogenic disease. Eating disorders in animals are rarely mentioned in scientific literature, but Otto’s researchers theorize that stress experienced early in a pet’s life may be linked to abnormal food-related behaviors.

If you suspect your cat has a food obsession that is significantly disruptive to daily life (your cat’s and your own), I recommend a veterinary visit first to rule out any underlying medical problems that can have similar symptoms. If your kitty is otherwise healthy, I recommend a dietary change to a real meat-based diet (eliminating all the extra carbohydrates cats shouldn’t be eating in the first place), and trying the behavior modification program outlined above to reduce the stressors in your pet’s life and negative food-related behaviors.