We love lions, cheetahs, tigers and all the rest of their big cat counterparts, but we think it’s time for them to share the spotlight with their smaller, lesser-known relatives. From the smallest wild cat species in the world to a cat who resembles a lemur, let’s take a look at nine deceivably cuddly small wild cat species you may have never heard of. 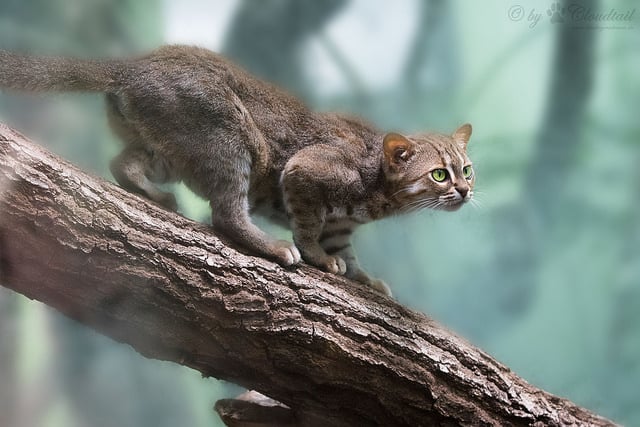 This pint-sized predator is the smallest wild cat in the world. Weighing in at just 2 to 3.5 pounds fully grown, you might think your 10 pound housecat could take on a rusty-spotted cat, but what they lack in size they make up for in ferocity. (Still, they tend to avoid big cats and other large predatory mammals.) They live in India and Sri Lanka, and often inhabit moist forests. However, they have also been found living in drier areas, and have even been known to venture far out of their natural habitat to take up residence in abandoned homes. These desert cats may look just as adorable and innocent as your own cat, but looks can be deceiving. Sand cats are fierce little predators who inhabit the Sahara Desert, the Arabian Peninsula and parts of Central Asia. They love dry areas, and are often found in plains or valleys. When temperatures become too hot or cold they burrow in the sand. A fully grown sand cat weighs 3 to 7.5 pounds. Their diet consists primarily of small rodents, but they have been known to take down venomous snakes without hesitation. As you probably guessed, fishing cats love water. They’re great swimmers, too, thanks to the webbing between their toes. Adult female fishing cats weigh 11 to 20 pounds, while adult males weigh 18 to 30 pounds. They primarily inhabit the wetlands of South Asia, but have been spotted near water sources at up to 4,900 feet elevation in the Indian Himalayas. Living up to their name, fishing cats eat plenty of fish, but they also enjoy shellfish and frogs. They will eat other mammals, however, including small deer and wild pigs. At 5.5 to 10 pounds, this expressive cat is the closest in size on our list to a domestic cat. The Pallas’ is a reclusive cat, residing in the caves, crevices and burrows of Central Asia, most commonly in Mongolia and Russia. Much like domestic long-hair cats, Pallas’ cats appear larger than they really are, thanks to their incredibly fluffy coat that keeps them warm in the cold. Over 50 percent of the Pallas’ diet is comprised of one animal: the pika. (Now that you know this don’t look them up, they are adorable.) Is this the supermodel of wild cats? We think so. The beautiful caracal is a cat well-adapted to its dry environment. They inhabit savanna, semi-desert, dry woodland, arid hills and dry mountains in Africa, the Middle East and India. An adult female weighs 13 to 35 pounds, while an adult male weighs 18 to 44 pounds. Caracals will hunt many animals, including mongoose, rodents and even monkeys, and they do so at night. Their most notable feature, the black tufts on the tips of their ears, have a debatable function. The tufts are thought by some to keep flies away and help camouflage the cat in tall grasses, but most researchers believe they are used to communicate with other caracals by twitching. This cat’s round features resemble some sort of teddy bear/wild cat hybrid, but don’t attempt to cuddle up with one. The kodkod weighs a mere 3.3 to 6.6 pounds fully grown. They are found in Central and Southern Chile, preferring to inhabit the moist temperate forests of the Chilean Coastal and Andes mountain ranges. The kodkod’s diet consists mainly of small rodents, birds, reptiles and insects, and they’re not afraid to venture out to steal farmers’ chickens. If this cat walked through your backyard and you tried to call to it, we wouldn’t blame you. At first glance, their size and features are strikingly similar to a large domestic tabby or Bengal cat. Thankfully, you don’t have to worry about that happening. Geoffroy’s cats prefer a life of solitude in lush vegetation throughout Northwest Argentina, Bolivia, Paraguay and Brazil. Adult Geoffroy’s cats weigh 4 to 17 pounds, and their diet depends somewhat on where they live. They are not picky, and tend to eat whatever is available. This can include hares, rodents, birds and sometimes frogs or fish. The black-footed cat is nearly as teeny-tiny as the rusty-spotted cat; adults weigh 2.2 to 5.5 pounds. Wondering where the black feet are? As cute as this cat would be with black “socks,” they get their name from their black paw pads. Black-footed cats are found in Botswana, South Africa and Namibia, where they inhabit grass plains, sand plains and scrub desert, including the Kalahari and the Karoo. These cats don’t let their size prevent them from eating well; they primarily hunt rodents and small birds, but they’re capable of killing hares which are often larger than them. As promised, the cat that looks like a lemur. Flat-headed cats are indeed flat-headed, and a bit funky looking, but we mean that as a compliment. They are yet another incredibly small wild cat species, weighing 3.3 to 5.5 pounds fully grown. Flat-headed cats live on the islands of Sumatra, Malaysia and Borneo. Not much else is known about their habitat, but they are thought to inhabit lowland forests, swamp forests and mangroves. Their diet consists mainly of fish, but they are said to hunt frogs and crustaceans as well.

Okay, we’re going to stop here – we don’t want to melt your heart completely. But if you’d like to see more, The Wildcat Sanctuary’s Small Cats page is a great resource. Unfortunately, these small wild cats face the same issues as their big cat cousins. Illegal hunting and habitat loss are two serious threats to these amazing animals’ lives. If you’re interested in learning how you can help, or would just like to know more about the issues facing them, both the Global Wildlife Conservation and the International Society for Endangered Cats Canada have great programs you can look into.