Harriet, a short-haired tabby cat disappeared nine years ago in California and was found in Idaho on September 19, 2022 thanks to a microchip and a couple of good Samaritans!

Harriet, previously lived at a California ranch with her owner, when she disappeared nearly a decade ago. On Sept 19th, a couple found her on the side of the road about 1,000 miles away from her original home. The couple took her to Kootenai Humane Society in Hayden, Idaho – not far from the Canadian border. The rescue is collecting donations for pets like “Harriet the Wander.” 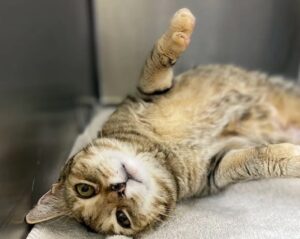 Vicky Nelson, Director of Development for Kootenai Humane Society said “We’re always excited when we find a chip. The lady (who) was at the front desk called the owner that was listed on the chip, she started talking to her, and the lady was pretty much speechless because she didn’t realize that her cat was still alive.”

It’s estimated that Harriet is about 12 or 13 years old, but she looks great and is in great health. Wherever Harriet has been, she has been well-cared for (or she’s cared for herself really well.) She’s very social and loves being pet.

Harriet is currently living with a foster family. The original owner may send someone to pick her up, but she’s also concerned that someone else may be looking for Harriet – perhaps another family that took her in during the last 9 years. 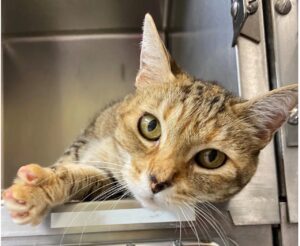 How did Harriet end up so far away, and what has she been doing all this time?

One theory is that someone found Harriet when she was out roaming around in California and didn’t check for a chip. Another possibility is that was either picked up or sneaked into a vehicle while a member of her family was traveling.

Most experts agree that microchipping your pets is extremely valuable. The chip itself is tiny, smaller than a grain of rice and very inexpensive. While some argue that a collar with a tag is sufficient, pets that get out often lose their collars and tags as they roam. The longer they’re gone, the less likely the collar is to stay put.