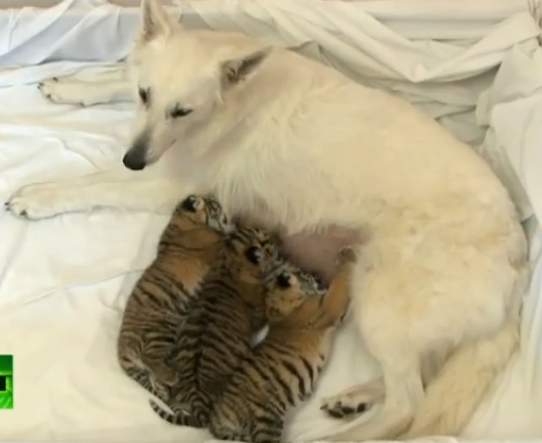 A dog at a Russian zoo has adopted three tiger cubs after their mother deserted them.

The tiger cubs—two male and one female—were born on Nov. 14 at Oktyabrsky Zoo in Sochi and soon abandoned by their mother, Bagira, who had done the same thing with another litter earlier this year.

The tiger cubs initially resisted the setup, baring their claws and hissing at Tallim, according to London’s Telegraph. But the pooch eventually won them over, “lavishing her new brood with attention and nudging them playfully.”

Video from the zoo shows Tallim licking the trio, allowing them to climb over her and, more important, feed.

It’s not unusual for dogs to adopt tiger cubs as their own—particularly in Russia.

In May at the same zoo, in fact, two Siberian tiger cubs abandoned by their mother were treated like pups by a wrinkled, sand-colored shar-pei named Cleopatra.

“She accepted them right away,” Oktyabrsky assistant director Viktoria Kudlayeva told the Associated Press in June. “She’s cleaning them and breast-feeding them as if they were her own. And they also sleep together.”