Secret life of the cat: The science of tracking our pets Secret life of the cat: The science of tracking our pets

They share our homes, sleep on our beds and occasionally bring unwanted gifts. Yet, despite our domestic cats playing a big role in our lives, we know surprisingly little about what they get up to. A research project by BBC2’s Horizon and the Royal Veterinary College set out to find out more. Alan Wilson, a professor specialising in animal movement, describes what was involved.

As a research scientist and vet at the Structure & Motion Laboratory at the Royal Veterinary College (RVC), I research how and why animals move the way they do.

A lot of my research takes place out in the field so I can study how animals move in their natural environment. Studying animals in the wild without disturbing their natural behaviour has never been easy, but over the past few years a lot of new technology has come along to help us. 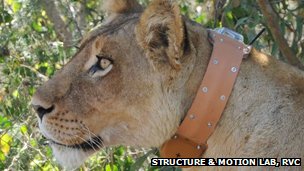 My research team has used this technology to develop some very specialised wildlife tracking tags and collars. They use a combination of high-accuracy GPS and electronic sensors to record the activity and movement of animals ranging from pigeons to big cats.

Recently, we used our collars to study wild cheetahs in Botswana. We have been able to see when they are active and how far they range. We have also discovered how often they hunt, how often they make a kill and new information about their athletic capabilities.

“We saw evidence that some cats appeared to ‘timeshare’ territory – roaming outside at different times to avoid meeting or coming into conflict with other cats” – Prof Alan Wilson, Royal Veterinary College

But no-one has applied the same study methods to domestic cats. Perhaps we think we know about them because they are so familiar to us – living in our homes and being part of our families.

In fact, we know less about some aspects of their behaviour than we do about many wild cats. So the Horizon programme and the study in our chosen village – Shamley Green in Surrey – was a fantastic opportunity to find out some of this missing information.

The biggest challenge for the team was to make the tracking equipment – the GPS and activity sensor tags – small and light enough for domestic cats to wear around their necks on safety-release collars.

GPS uses a lot of power, but we could only use a small battery, so in order to save energy, we used an activity sensor to trigger the GPS only when the cat was moving. This also saved us from collecting a lot of uninteresting data on sleeping cats.

The equipment used had to be downsized for domestic cats

Each of the collars also had a small radio transmitter, so if the collar did fall off we could track it down. Luckily we only lost a couple, so we were able to collect a very complete data set from all the cats we tracked.

So, with our equipment developed and our village of cats ready for action, my research team moved with their computers into Shamley Green Village Hall for the main week of the study in April this year. 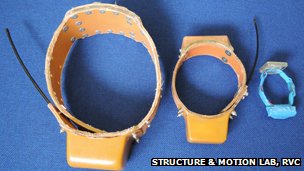 Tracker collars for lion, cheetah and the domestic cat

Being on site enabled us to examine the data as soon as it came off the collars, and to work closely with behaviour specialists Dr Sarah Ellis, of the University of Lincoln, and Dr John Bradshaw, of Bristol University, to interpret early results and decide how the study should progress.

For example, the collar data helped us to decide where to place fixed cameras by identifying activity hotspots. The data also told us how active each cat was, which helped us choose which cats to fit with “cat cam” collars. We also wanted to discuss the data with the owners to help interpret each cat’s behaviour.

Once we had processed the GPS and activity data for the cats, we began to visualise it. Specially designed computer software overlaid the cat tracks on aerial photographs, allowing us to present the activity data on big screens. These maps also helped us to explain the findings to the owners. 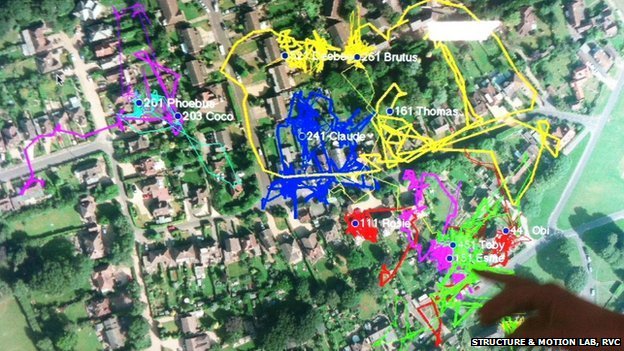 Maps of the cat routes were displayed for villagers to see.

The project was fascinating for us as we were able to learn so much about cats and their human interactions. Often our findings would contradict what owners believed their cats were getting up to.

We were particularly surprised by how small the ranges of most of the cats were, and how few of them went into the surrounding countryside. They tended to remain within the confines of the village and roamed in those areas. One theory is that their roaming is dictated by the hunt for food – something more easily done in the village. For example, we saw cats going into houses other than their own.

It was also interesting to see how much variation there was in the cats’ activity patterns through the day. This was influenced by many factors, such as the weather, temperature, feeding times and owner’s timetables. We also saw evidence that some cats appeared to “timeshare” territory – roaming outside at different times to avoid meeting or coming into conflict with other cats.

Since the programme was filmed, we have collected further data from the village cats. The results of our analysis will be published in a scientific paper in order to enable scientists everywhere to learn more about domestic cat behaviour.

We also hope our study will enlighten owners on the activities of their cats and shed light on the mystery of what they get up to once they go through the cat flap.