In the final post of our three-part series on service, therapy and emotional support cats, I am proud to introduce you to Symie and his human, Jennifer. Symie is a fully trained and graduated Seizure and Diabetic Alert Service Cat. Symie graduated in 2009 before the ADA’s new law took affect declaring that only dogs and mini horses could be considered service animals. Symie, however, is very capable, as you will learn.

You’ll recall from the first post that a service animal provides help to individuals with disabilities to mitigate their risk. Service cats are not considered pets, but rather working animals that have serious jobs to do. Unlike therapy animals, these animals are allowed to accompany their owners into any venue without restrictions.

Let’s now meet Jennifer who has seizures that often appear without warning – a frightening and dangerous situation. Jennifer needed help and Symie came to her rescue.

TCT: Jennifer, when you learned that a service animal could potentially help you, what did you do?

Jennifer/Symie: I first wanted to get a service dog, but earlier in the year I was attacked by a dog and the experience left me frightened and nervous. Despite trying, I was finding it difficult to work with and trust my future service dog, even though I knew intellectually that he had a sweet personality. I just could not trust a dog after my earlier experience.

While I was struggling to overcome my fear of dogs, my cat Symie seemed to have been observing what was going on. He’d been with me for about 3 months or so when he started signaling to me when I was about to have a seizure. 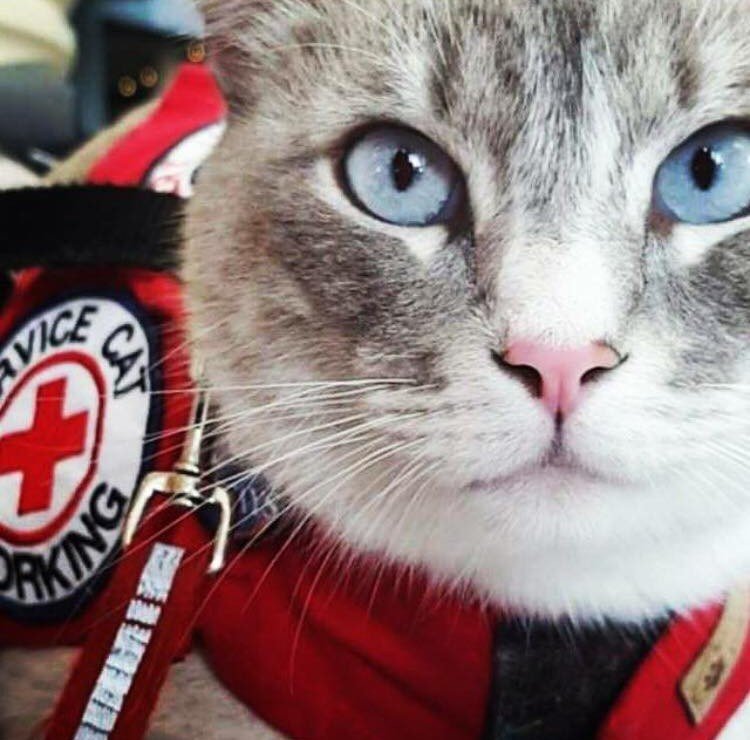 TCT: How did Symie show you that he could signal?

Jennifer/Symie: It started when he entwined himself around my legs, licking my right calf frantically. He does this if I am standing.  If I’m in a position where he can reach my face, he’ll start licking my jawline. I happened to mention this behavior to my service dog trainer and my trainer told me that cats are actually great at detecting or alerting for seizures, especially the kind that I have which come on suddenly and without warning.

TCT: What kind of training and/or certification did Symie go through?

Jennifer/Symie: I was lucky because my trainer was open to giving Symie a try at service training. Symie made a good candidate, since he was Siamese and he was really eager to learn. Symie’s training followed the same procedures and steps used to train service dogs.

Symie took to the leash right away and he wasn’t phased at all when we introduced him to new stimuli and surroundings. While we found this amazing, we were very careful not to force him. I decided it was Symie’s choice if he wanted to do this and if he was able to keep up with the strain of service work. Symie was just incredible. It was like he had finally found his calling. He absolutely loved the work and the challenge. Symie had been waiting for this job his entire life.

Symie’s high energy was now focused into service work and in 2009 he passed his Public Access Test and graduated from the local Service Dog Program. He has been my working partner ever since. In 2013, with the help of another trainer, he was trained as a diabetic alert as well, and is able to detect and alert to both high and low blood sugar. 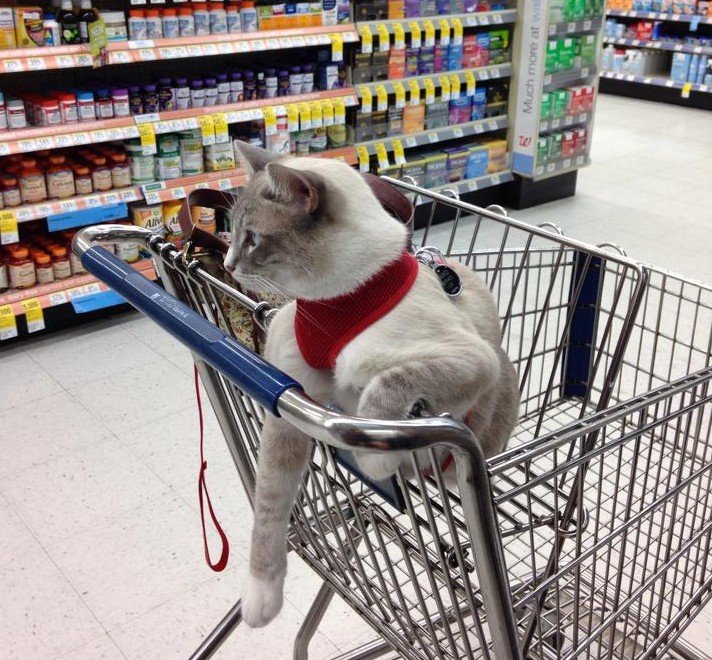 Symie at the grocery store, hanging out in the cart.[/caption]

TCT: How do people know that Symie is a service cat and not an ordinary housecat?

Jennifer/Symie: Symie wears a vest that says “Seizure and Diabetic Alert Cat Working” that he received after his graduation. This way, people immediately know that he is not a pet, but a working cat.

TCT: How does Symie alert you today?

Jennifer/Symie: He alerts me of an oncoming seizure about 3-5 minutes before they happen. I also tend to run high on my blood sugar, and he will signal me by doing a “hip tap” where he reaches up and touches my hip to signal “high blood sugar” or he gives an “ankle tap” to signal low blood sugar.

For seizure’s, his alert remains the same where he will lick either my jaw or my leg. When he does this, he’s telling me that I need to get to a safe spot away from sharp corners, dangerous objects or situations. When I have a seizure he is trained to find the nearest person and alert them – which is usually my husband. However, if I am staying with friends, I will let them know what Symie does in case I have a seizure and what they should do.

TCT: In your opinion, what types of cats make good service cats?

Jennifer/Symie: Older rescue cats seem to make better service cats than kittens, because just like a dog, not all cats are cut out for service work. They need to have high energy, a calm personality and the ability to take in new situations by trusting in their human partner.

TCT: How has Symie changed your life?

Jennifer/Symie: Last year was the first time I was allowed to go out of state by myself, as long as Symie came with me. Symie and I flew to Orlando, Florida for Leakycon (a Harry Potter convention). Where we live, we’re rarely exposed to things like public buses or escalators.

I was a bit nervous to see how Symie would handle this new situation. When the first public bus pulled up alongside the curb it was huffing and puffing and its hydraulic breaks were hissing. I could feel Symie’s uncertainty at what the bus was, his fur was puffing out a bit, though he didn’t move from my side. I reassured him and we got on the bus together. After that, buses were no longer a big deal. He trusted me just like I trusted him to alert me.

Symie got a lot of attention at the Leakycon convention and earned the nickname “LeakyCat.” TCT: Do you post about Symie’s adventures so we can keep up?

Cats No Longer Considered Service Animals by the ADA – What’s Next?

Jennifer noted that the ADA law was changed in 2011 and cats are no longer considered service animals because the ADA feels cats are untrainable and unable to handle the strain of service work.

Since that time, research has been completed and there is proof that cats like Symie and others can be trained and do well in handling the strain of every day service work. Many states, even those that follow the ADA make exceptions for task-trained service cats. And, as long as the the cat is well-trained and does not cause a public disturbance, businesses are generally accepting of them.

Jennifer is working hard with her state senator and with other people in the Department of Justice to try to get the ADA bill amended so that it once again includes cats as service animals.

Read about the difference among service cats, therapy cats and emotional support cats.

Read about Raul the Therapy Cat.

How To Register Your Cat As An Emotional Support Animals

Interested in learning more about how you can get your cat officially registered as an emotional support animal? We did all of the heavy lifting and compiled our recommendations in this post.