Is Your Cat Right-Pawed or Left-Pawed? 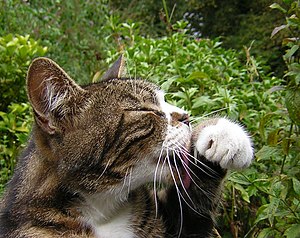 Paw preference won’t make a dog or cat walk, talk or wink like a human. You won’t even get a high-five or a fist pump out of it, said Dr. Nick Dodman, director of the Animal Behavior Clinic in the Department of Clinical Sciences at Cummings School of Veterinary Medicine at Tufts University in Massachusetts.

There’s the curiosity factor though, he said. “Wow, I thought that was something unique to people, and how weird to think the dog could be” left- or right-pawed.

Vets and owners agree that pets, including horses, have right and left preferences.

Researchers are studying things like right brain-left brain connections, genetics and sexual orientation that may one day change the way dogs and cats are bred, raised, trained and used, said Dr. Stefanie Schwartz of the Veterinary Neurology Center in Tustin, Calif., and a member of the American College of Veterinary Behaviorists.

Some horses have to be ambidextrous, said Dr. Sharon Crowell-Davis, a behavior and anatomy professor in the College of Veterinary Medicine at the University of Georgia.

A 1991 study at Ataturk University in Turkey showed 50 percent of cats were right-pawed, 40 percent were left-pawed and 10 percent were ambidextrous. That study might be out-of-date, Schwartz said, but it does provide percentages.

A 2006 study from the University of Manchester in England showed dogs were split half-and-half.

About 90 percent of humans are right-handed and 10 percent are left-handed.

Laterality — the textbook term meaning one side of the brain is dominant over the other — may someday help breeders predict which puppies will make the best military, service and therapy dogs, Schwartz said, and that could be lifesaving.

But for now, here are a few simple tests you can do to determine your pet’s preference, she said. Doing it 100 times (over several days) should give you an answer, she said.

— If you teach a dog to shake, which paw does it offer you first and most often?

— Fill a toy with something delicious and put it in the center of the dog’s visual field. Which paw does it use to touch the toy first? Which paw does the dog use to hold the toy?

— Put something sticky on a dog or cat’s nose. Which paw does the animal use to remove it?

— Place a treat or a piece of cheese under a sofa, just beyond a dog or cat’s reach. Which paw does it use to try and get it out?

— Dangle a toy over a cat’s head. Which paw does it lift to bat it?

— Put a treat under a bowl. Which paw does the cat or dog use to move it?

— When a dog wants in the backdoor, which paw does it “knock” with?

Schwartz said there are a few things that might alter test results:

— If a dog has arthritis or an injury in a shoulder or leg, it could use the other to compensate.

— When a cat really wants something, tests show it uses its dominant paw, but when it’s just fooling around, it may use either or both.

— It’s possible that handedness in dogs, and maybe cats, will change over time as the animal’s motivation changes.

Luckily, the well-being of dogs and cats doesn’t depend on preference. The same cannot be said for horses, Crowell-Davis said.

In U.S. racing, horses only have to lean left because all races are run counterclockwise on tracks, but in some competitions and in some other countries, horses have to race and canter both ways. “They have to be able to circle right and left. If not, they can trip,” Crowell-Davis said.  “You have to work to get them to take the lead they prefer less,” she said.

Crowell-Davis has never seen an advertisement promoting right- or left-pawed dogs or cats. “The only time you see it used in advertising is with horses. If a horse if being offered for sale, because of issues on the lead, it may say ‘Works well on both leads’ to emphasize the horse has had training.”

Robin A.F. Olson of Newtown, Conn., founder and president of Kitten Associates Inc., a rescue organization, said her cats are always reaching for toys or treats with one paw or another.

There won’t be any such lessons for her cats, she said. “I try not to be judgmental of my cats’ abilities or lack thereof. We will never worry about the anti-paw.”

It appears that Nora, an internationally acclaimed 8-year-old piano-playing tabby from Philadelphia, owned by piano teacher Betsy Alexander and her artist-photographer husband, Burnell Yow, is right-pawed. Yow studied her videos and “determined that she appears to lead with her right paw, then follow with her left,” Alexander said.

But she has her ambidextrous, headstrong moments.

“She uses both paws to reach for specific notes, even black notes … and she uses her head to roll a series of multiple notes.”