How a Kitty Walked 200 Miles Home: The Science of Your Cat’s Inner Compass

When a battered, skinny tortoiseshell cat wandered into a yard in Florida earlier this 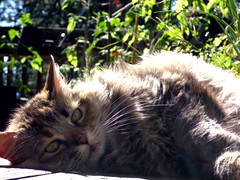 year, she could have been any other stray, but she was nothing of the kind. She carried an implanted microchip—one put there by a loving owner—and it revealed an intriguing story: the cat belonged to a local family, had been lost on a trip two months earlier, and  had traveled 200 miles (322 km) in that time to arrive back in her hometown. Her journey inspired a spate of articles looking for an explanation for how this one cat, and a few others who’ve made similar trips, managed such impressive feats of navigation. The response from many eminent animal researchers was the same: “No idea.”

Cats’ long-distance travels are relatively rare in the scientific literature, which explains the dearth of answers—at least so far. But that’s not the case for the wanderings of sundry other creatures, especially those that migrate. Such extreme journeys—mapless, compassless, sometimes intercontinental, through places the animals have never seen before—seem nothing short of miraculous. That’s the kind of mystery that gets scientists moving, and move they have, conducting all manner of experiments over the years—locking animals in planetariums, carrying them around in dark boxes, putting them in wading pools wrapped in magnets, and destroying various bits of anatomy to see which piece was the important one. These experiments have yielded fascinating insights into the animal brain and into a world beyond human sensation.

Part of what navigating animals do is not entirely surprising. Planetarium studies reveal that some animals steer by the stars, an approach that’s comfortingly familiar to Homo sapiens but practiced by organisms as distant as the nocturnal dung beetle, which, as one recent study revealed, can roll its precious gob of poo in a straight line only as long as the Milky Way is in view. One of the most accomplished animal navigation researchers of the twentieth century, naturalist Ronald Lockley, found that captured seabirds released far from their homes could make a beeline back so long as either the sun or the stars were visible; an overcast sky threw them off so much that many never made it back.

But plenty of other navigating animals are using something most humans regularly forget exists: the Earth’s magnetic field. In illustrations, the field is usually depicted as a series of loops that emerge from the south pole and reenter the planet at the north pole, and extend out to the edges of our atmosphere, sort of like a cosmic whisk. Our compass needles are designed to align with the field, and in the last few decades it’s become clear that numerous animals can find their way by feeling some of its various field.

Sea turtles, for example, don’t use the field simply to tell north from south. According to experiments led by Kenneth Lohmann, a professor of biology at University of North Carolina, Chapel Hill, they are actually born knowing a magnetic map of the ocean. Newly hatched loggerhead turtles in the populations Lohmann studies journey 8,000 miles (12,900 km) from their hatching beaches around the Atlantic Ocean to reach feeding areas, and if they don’t keep right on track, they do not survive. Lohmann learned early on that the turtles could sense the Earth’s magnetism: he found that hatchlings from the Florida coast, which normally swim east in darkness to start their migration, swam the other way when they were put in a magnetic field that reversed north and south. That got Lohmann thinking that the turtles’ long-distance navigation might be linked to their being able to respond to whorls and quirks in the planetary field they encounter along the way.

To study this, he and colleagues collected baby sea turtles a few hours before they would have left the nest on their own and put them in pools surrounded by magnetic coils. The coils were designed to reproduce the Earth’s magnetic field at specific points along the turtles’ migration. Reliably, the young turtles oriented themselves and swam in the direction relative to the magnetic field that, had they been in the open ocean, would have kept them on course. Lohmann has tested this with 8 different locations along their route, and in each case the turtles head in just the direction required to get them to their destination. The turtles may not know where they are in any big-picture way—as Lohmann says, they may not see themselves as blinking spots on a map—but they have inherited a sense that should they feel a particular pull from the magnetic field, well, better take a right.

The list of animals that navigate by magnetism, suspected and confirmed, is long, and includes a few mammals in addition to migrating birds and turtles. But our understanding of the mechanism behind that ability is sketchy: sea turtles tend to be threatened or endangered species, so scientists can study only their behavior, not their brains, and even in animals in which such work is possible, it’s hard to tell what parts of the brain and other physical structures are involved.

Pigeons, one of the most intensively studied animal navigators, show how complex a question this is. One leading theory holds that iron-containing cells in the beak send magnetic information to the brain, since destroying the nerve that carries sensation from beak to brain seems to disrupt pigeons’ navigation. However, last year it emerged that those beak cells are not neurons capable of sending messages, as had been supposed; they appear to be immune cells, throwing the beak theory into confusion. Another school of thought suggests that the magnetic field may be affecting chemical reactions in the birds’ eyes, literally changing the way the world looks when they are oriented in a particular direction. And David Dickmann, a professor at the Baylor College of Medicine whose primary work is on a magical ability we humans often forget we have—our ability to sense gravity and constantly adjust our position to keep our balance—has lately published work showing that pigeons may have a magnetic-field sensor in their inner ears. No one knows yet which of these mechanisms, or what combination of them, is at the root of the pigeon’s powers.

And lest we forget, the magnetic field is far from the only thing out there that navigating animals can sense and humans cannot. The heads of sharks are threaded with jelly-filled tubes, called the ampullae of Lorenzini, that allow them to detect extremely faint electric currents and may help them with navigation. Scents in the air, at concentrations far below human perception, are perceivable to numerous creatures that may use them to steer (in fact, pigeons that cannot smell seem oddly lost, even with their magnetic abilities intact). Bees can see patterns in sunlight invisible to the naked human eye and can use them to find their way.

We can see only the outcomes, never the workings, of whatever evolved systems animals use to orient themselves across hundreds or thousands of miles. But that hasn’t stopped us from working to understand the feats of migrating reptiles, homing pigeons, and even lost pets. With reminders like the odyssey of the Florida housecat, how can we stop?

Toggle Sliding Bar Area
Sign-up (your cat)! Be the first to hear about cat-related news and offers! =^.^=