Cat skeptics seem to always say the same things. To them, cats are lazy, boring and mean, but cat owners know this to be far from the truth. We know cats to be intuitive, curious, loving, agile, and the list goes on.

In an article for petMD, Dr. Lorie Huston, DVM, explained that a cat’s brain accounts for just 0.9 percent of its body mass. Small, yes, but ask any cat owner if they think their cat is intelligent and the answer will likely be a resounding yes. Sure, they spend a fair amount of time snoozing, but cats can learn to perform some pretty amazing skills when they’re awake, like ringing a bell for food.

That said, much like people, some cats are smarter than others. Here are six of the most intelligent cat breeds, according to Purina’s research. Other resources feature additional breeds, but these six managed to make multiple experts’ lists. The Abyssinian’s origins are somewhat difficult to trace, but they are commonly thought to be from Egypt, a country which was known to worship cats, Ethiopia or Southeast Asia. Sometimes referred to as “the Border Collie of the cat world,” Abyssinians are energetic and intelligent. They can jump up to 6 feet, and have been known to open doors and play fetch. Abyssinians usually don’t like to be cuddled, but their loyalty and curiosity will have them following you around everywhere you go. “Paws off” doesn’t mean much to Abyssinians; they love exploring and getting into things, which also makes them good candidates if you’re looking for a cat who can be leash-trained.

Read:  TikTok Vet Exposes The Cruelty Inherent In Some Of The Cutest Cat Breeds The Bengal cat came to be after an Asian Leopard cat was bred with domestic cats in 1963. Its exotic, leopard-like spots make the Bengal one of the most popular breeds today, but owners must be prepared for more than good looks with this cat. Bengals are high-energy, athletic cats. Much like the Abyssinian, they are great jumpers and like to follow you around and investigate whatever it is you’re working on. Bengals love getting into things when they’re bored, and will even take things apart to see how they work, so don’t leave them alone for too long. Bengals have also been known to have secret hiding places–you might just lift the couch one day and find a pile of kitty collectibles! Yet again, the Burmese is a cat you can expect to become your furry feline shadow. Their origins are in Southeast Asia, and they are extremely vocal and affectionate cats. Burmese are highly intelligent learners, and owners are encouraged to present them with food puzzles and teach them tricks because they love to exercise their brain. 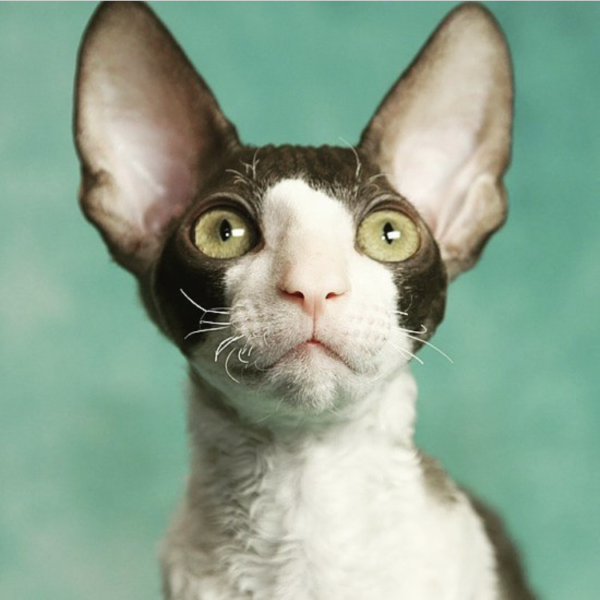 The Cornish Rex originates from Cornwall, England. They’re social cats, and like to be involved in all your household happenings. The Cornish Rex can often be found perched up high, where they can easily track their surroundings. Their intelligence manifests in a desire to be the center of attention; they will play fetch and can be taught to do tricks to wow their audience. You guessed it–Scottish folds are from Scotland. They are social and like to follow their owners around, and when they’re not actively entertaining you, you can expect to get a good laugh from their odd resting positions, one of which has been coined “the Buddha.” Scottish Folds are known to open cabinets in hopes of finding something to play with, or better yet, something to snack on. Like the Burmese, Scottish Folds do well with food puzzles. The Singapura’s origins are up for debate. Some say they’re from the U.S., and others insist they’re from Singapore. They are thought to be a mix of the Burmese and the Abyssinian, so it’s no wonder they’re regarded as one of the smartest breeds. They’re also one of the smallest, weighing just four to seven pounds as adults. Singapuras are vocal busybodies, and live by the phrase “what’s yours is mine.” They will consider all your belongings theirs to play with, and if you tell them “no” now, they’ll probably come back later.

Even the smartest cats have their quirks, and it’s important to be aware of them and make sure you can properly care for the breed you’re considering. Check out  Vetstreet.com for additional information on these six cats’ personalities, health concerns, care tips and more.

Dana Mack is a freelance writer and copy editor living in Illinois. She recently graduated from Columbia College Chicago, where she studied multimedia journalism. Dana enjoys arts & culture and outdoor/recreation writing, and aspires to move out West in the future.

The Catnip Times is built on recommendations from you, our vibrant cat-loving community; it’s how we uncover hidden gems like new products, important issues, and cuteness. If you know of an interesting story or a topic that deserves awareness, tell us about it!