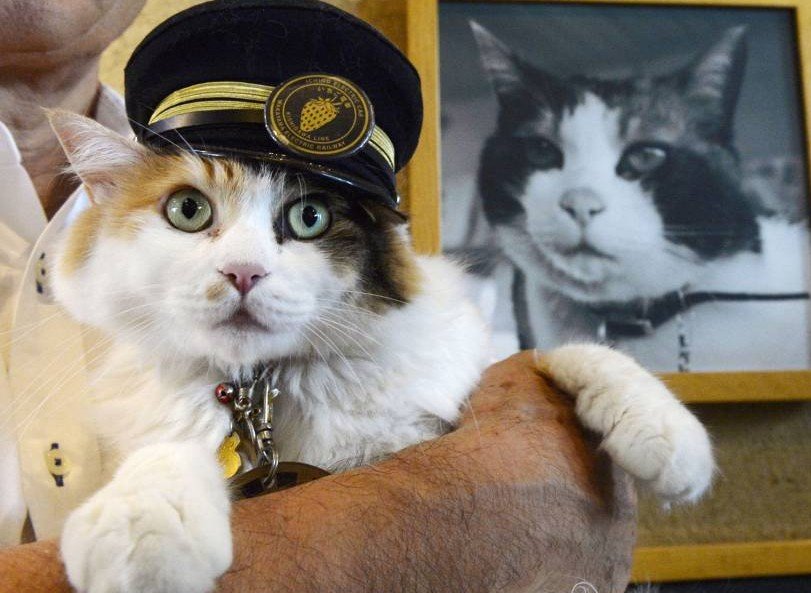 Tama was the beloved cat stationmaster of Kishi Station in Kinokawa, Wakayama Prefecture for many years, until she passed away in June 2015 at the age of 16. The station was in financial trouble before naming Tama the stationmaster in 2007.  After Tama took over, the Kishi Station not only became profitable, they saw revenues soar from people wanting to visit just to see Tama.

Japan mourned the loss of a cat that was seen as somewhat of a national treasure.  Thousands showed outpourings of support, bringing flowers and other tributes to the Kishi station. They also unveiled Tama Shrine, a Shinto shrine where Tama lays at rest; she’s now known as a deity protecting the once money-losing Kishigawa Line. The shrine includes two golden maneki-neko’s of Tama.  The Japanese believe that maneki-neko’s bring good luck and prosperity.

But now, in hopes of continuing this tradition of having a cat as the stationmaster of Kishi Station, Wakayma, the Japanese railway has named a new cat as stationmaster – Nitama – meaning “Tama the Second.”

Nitama, like Tama, is a calico kitty, but she’s only 5 years old. She now adorns the stationmaster outfit and is taking over the role. On her first day, she paid her respects to former stationmaster, Tama. Nitama takes over the official role after serving as a subordinate to Tama since 2012.

Best of luck to Nitama in her new role! We hope Kishi Station continues to prosper and cats continue to earn the well-deserved respect of the Japanese people and cat-lovers around the world!