POLL: Reporting Animal Abuse – What Would You Do? I recently had this dilemma.  I was surfing the internet, looking for interesting stories 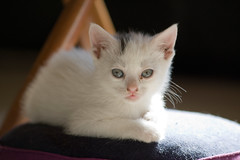 about cats to share with all of you and came across an article about a town that was trying to eliminate the feral cat population (even though the colony was healthy and being looked after via TNR).  I began reading the comments to see what the people of this town thought, and was horrified when I discovered that some lunatic was bragging, paragraph after lengthy paragraph about how he shoots HUNDREDS of cats on his property and buries them.

You can probably guess what I did… but I’m curious what you might do.  Please share your thoughts.