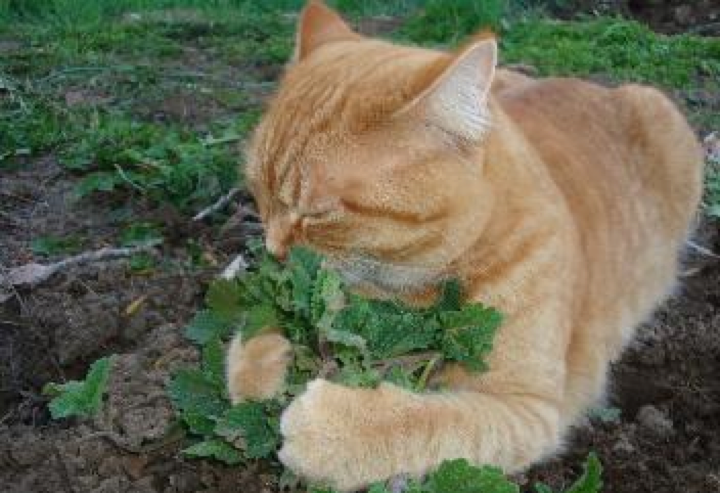 You find your cat rolling and twisting on the floor, rubbing his face against it, and drooling everywhere. Right away you know—he’s been in the catnip.

What is catnip, anyway?

Catnip is a member of the mint family, which has about 250 species. The essential oil in catnip, nepetalactone, has a powerful effect on cats who are sensitive to it, turning even the most sedentary couch potato into a flipped-out ball of ecstasy.

promptly goes nuts. Researchers aren’t sure what the neurological explanation is, but it’s thought that catnip mimics feline “happy” pheromones and stimulates the receptors in the brain that respond to those pheromones. When eaten, however, catnip seems to have the opposite effect: the cat may become very mellow.

Most cats react to catnip by rolling, flipping, rubbing, and eventually zoning out. They may meow or growl at the same time. Other cats become hyperactive, running around like their tails are on fire, and some get downright aggressive, especially if you approach them. They must protect their toys!

Usually these sessions last about 10 minutes, after which your cat loses interest. It may take as long as two hours for him to “reset” and become susceptible to catnip again.

An estimated 50 percent of cats don’t respond to catnip; it’s an inherited sensitivity.

Not all cats fall for catnip. It’s an inherited sensitivity, and if your cat didn’t get that gene, he simply won’t care about catnip. An estimated 50 percent of cats don’t respond. The trait doesn’t emerge until a cat is between three and six months old; until then, a kitten will not have a response.

Catnip is not just for cats. It’s been grown in medicinal gardens for centuries for its sedative effect on humans. Made into a tea, catnip has calming properties similar to chamomile. Concentrated nepetalactone is also an excellent mosquito repellent, 10 times more powerful than DEET, the most widely used chemical repellent. The only hitch is that it only lasts a few hours.

Catnip does lose its potency over time, so to keep yours fresh for you or your cat, store it in the freezer in an airtight container or bag.